In Time of War: Hitler’s Terrorist Attack on America by Pierce O’Donnell
Requirements: .PDF reader, 75 MB
Overview: in June 1942, eight German terrorists landed by submarine on the shores of Long Island and Florida with a mission to blow up major buildings and railroad hubs throughout the United States. “In Time of War” tells the dramatic story of how they were ultimately betrayed by one of their own, tried by a special military tribunal appointed by FDR, and zealously defended by an army colonel. Six of the eight were executed. The U.S. Supreme Court subsequently upheld the president’s power to order the military trial that passed the death sentences.
Genre: Non-Fiction > History 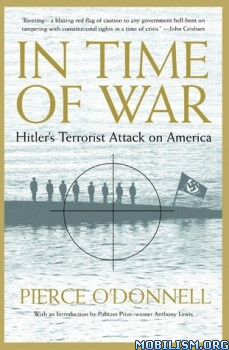