An unabashed geek, Sarah enjoys studying obscure subjects like the Plantagenet and Ptolemaic dynasties, and settling debates on provocative Tolkien topics such as why the Great Eagles are not Gandalf’s personal taxi service. Passionate about travel, Sarah has visited over twenty countries collecting sparks of inspiration (though New Orleans is where her heart rests). She’s a self-professed expert at crafting original songs to sing to her very patient pets, and a seasoned professional at finding ways to humiliate herself (bonus points if it happens in public). When at home in Pennsylvania, her husband and best friend, James, is very kind about indulging her love of fast German cars and expensive lattes.
Genre: Fiction > Sci-Fi/Fantasy 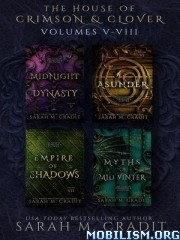 Included in this set:

Volume V: Midnight Dynasty
The Deschanel Curse, dormant for a decade, has returned with a vengeance.

Seers across the family are coming together, hopeful the Deschanel Magi Collective can solve this malediction that has plagued the family for nearly two centuries.

But how do you combat the blood oath of a grieving mother?

As the body count rises, it becomes apparent that strength, love, and ancient power provide no protection from destiny’s cruel hand.

Volume VI: Asunder
Broken and dispirited, the Deschanel family reels under the weight of a family curse. Lives were torn asunder, as their numbers diminished.

Amidst their pain, another prophecy takes shape. One laid by the ancient druidic Quinlan clan, in a time long forgotten. Seers across the family have borne witness to fragments. Distraught by the loss of her soul’s true love, Amelia begins to dream of an unknown man and a woman, designated by fate to live their story over and over again, throughout time.

Now, destiny reaches across the centuries.

In the family’s darkest hour, a reckoning with the Empyrean Senetat is fast approaching. Hope becomes the necessary consolation for grief, as the Deschanels come together to make their loved ones whole, in order to face this uncertain future as a united clan.

Volume VII: Empire of Shadows
Two dynasties clash for power. Only one empire can emerge.

In a time now legend, a sacred vow united the Farværdig and the Tuatha Dé Danann. One race born of fire, the other risen from nature. Together, they enjoyed centuries of peace and prosperity, under the protective blanket of this hallowed oath.

But when war came to the doorstep of the Tuatha, the Farværdig turned their backs. Expelled from their lands, those Tuatha who were not extinguished went into hiding, later re-emerging in secret as the Quinlans. The broken vow took its toll on the Farværdig, dividing the race into two factions: those willing to fall to heel of new restrictive laws, and rebels determined to restore the peaceful values of their kind.

In the midst of years of strife that follows, a Prophecy emerged, promising hope. Unite the races once more, and right the ancient wrong.

As the shadows of age and myth are exposed, the Deschanels find themselves deeply enmeshed in this war. Their bloodline and futures closely intertwined with both races, each member of the family must uncover their own vital role in fulfilling the Prophecy or risk decimation.

Volume VIII: Myths of Midwinter
Quillan Sullivan lost his twin brother two decades ago, a tragedy he never fully experienced due to his unusual ability to see and talk to Riley when no one else can. He believes this "gift" is a fluke, until the haughty, vainglorious love of his life, Estella, returns after several years abroad, and rips his world apart.

Estella Broussard loathes Quillan. He’s the last person on Earth she’d ever bless with her presence. To her great dismay, he alone holds the key to achieving her deepest desire. She will do anything to reach her aims, no matter the warnings… no matter the cost to Quillan.

Nerys guides Finn and Aleksandr on their mission to find Anasofiya and bring her home. Finn accepts her help, on the condition she keep no secrets. She relays what she knows… all except the visions her old companion has sent her, regarding a terrifying menace to the Deschanels back home: A necromancer has emerged, and this ominous knowledge has fallen into the wrong hands.

The threads of fate weave the Deschanels and Sullivans down perilous paths, as a centuries-old warning emerges: Seduction to sinners. A legacy in splinters. Beware, the myths of midwinter.