Hillary’s America: The War on Guns – 50 Reasons Why Liberals Want to Take Away Our Guns and How to Debunk Them by Adam Stone
Requirements: .ePUB .MOBI Reader | 338 kb
Overview: When looking at the statistics and crunched numbers, as of the time of writing, it has been estimated that around 270 to 310 million firearms are in circulation within the US alone, with at least one firearm in 37% to 42% of American households. These are important numbers because out of the legal law abiding gun owners in that percentile, more than 97% of those citizens do not commit gun related crimes. People who obtain guns legally are far less likely to commit violent crimes compared to those who don’t. The liberal argument for enforcing stricter gun laws only makes it harder for law abiding citizens, considering the people who commit violent crimes will not be obtaining firearms legally in the first place.
Genre: Non Fiction Politics & Government 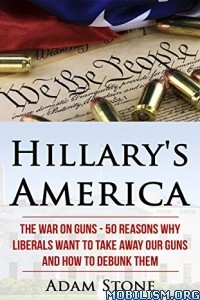