Hell Divers Series Complete by Nicholas Sansbury Smith
Requirements: .MP3/.M4B reader, 3gb
Overview: More than two centuries after World War III poisoned the planet, the final bastion of humanity lives on massive airships circling the globe in search of a habitable area to call home. Aging and outdated, most of the ships plummeted back to earth long ago. The only thing keeping the two surviving lifeboats in the sky are Hell Divers—men and women who risk their lives by skydiving to the surface to scavenge for parts the ships desperately need.
Genre: Audiobooks > Fiction 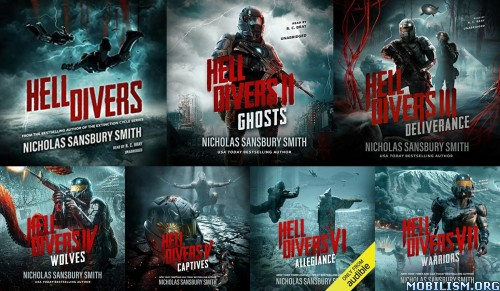 When one of the remaining airships is damaged in an electrical storm, a Hell Diver team is deployed to a hostile zone called Hades. But there’s something down there far worse than the mutated creatures discovered on dives in the past—something that threatens the fragile future of humanity.

Ten years ago, Hell Diver Xavier “X” Rodriguez fell to Earth. Those he left behind went on without him aboard the airship he once called home.
Michael Everheart — the boy once known as Tin — has grown into a man and the commander of Hell Diver Raptor Team. While Michael dives to help keep the Hive in the air, Captain Leon Jordan rules with an iron fist at the helm of the ship. But unrest stirs under his strict leadership as a prophecy of hope sweeps the lower decks.
When a mysterious distress signal calls the Hell Divers to the surface, Michael and his loyal team begin to uncover long-buried truths and the secrets Captain Jordan will do anything to keep. They dive so humanity survives… but will they survive the ultimate betrayal?

They will dive, but will humanity survive?
Left for dead on the nightmarish surface of the planet, Commander Michael Everhart and his team of Hell Divers barely escape with their lives aboard a new airship called Deliverance. After learning that Xavier X Rodriguez may still be alive, they mount a rescue mission for the long-lost hero.
In the skies, the Hive is falling apart, but Captain Jordan is more determined than ever to keep humanity in their outdated lifeboat. He will do whatever it takes to keep the ship in the air-even murder. But when he learns the Hell Divers he exiled have found Deliverance, he changes course for a new mission-find the divers, kill them, and make their new ship his own.
In the third installment of the USA Today bestselling Hell Divers series, Michael and his fellow divers fight across the mutated landscape in search of X. But what they find will change everything.

They dive so humanity survives. Now they take to the sea.
In the fourth installment of the award-winning and USA Today bestselling Hell Divers series, the Sea Wolf sets out to search for the Metal Islands. Leading the expedition is legendary Hell Diver Xavier Rodriguez. After enduring for a decade on the poisoned surface, his survival skills will be put to the test on the dangerous open seas. But storms, sea monsters, and the cannibalistic Cazadores aren’t the only threat to X and his small crew. Their mission will uncover hard truths about the history of the war that left humankind stranded in the air for centuries. And the fate of those still living on the airships might very well rest on this fragile and perilous journey to find a new home.

Humanity has finally found a new home, but the price is blood …
After a long, perilous journey, Hell Divers Xavier Rodriguez and Magnolia Katib discover the Metal Islands, a sunny habitable zone where thousands of people live by fishing and farming. But this "paradise" is really a violent warrior society ruled by the cannibal king el Pulpo. For the first time in X’s life, he is forced to lay down his arms and surrender.
Back on the airships, the Hell Divers are recovering from a gruesome discovery at Red Sphere, where they learned the truth about World War III. Now they must fight one last war-this time for what remains of their own endangered species. As the battle approaches, alliances will be forged, and others broken.
Forced to fight in the Cazador army, X faces his toughest mission yet. Will he help his people come down from the sky and claim the promised land, or will humanity go extinct?

The war for the Metal Islands is over, but the search for survivors has just begun.
After a long and bloody battle, legendary Hell Diver Xavier Rodriguez reigns as the dutiful but reluctant new king of the islands. Advised by a council of former sky citizens as well as Cazadores, he works to assimilate the two societies peacefully. But not all Cazadores have accepted the new order.
While X tries to ease tensions at home, a rookie team of divers, led by Michael Everhart, returns to the skies in Discovery, formerly the ITC Deliverance. Their mission: to locate other human survivors throughout the world and rescue them. But Michael s team aren t the only ones searching for survivors. A gruesome discovery reveals that android defectors continue to hunt humans across the globe. And they may not be the only ones.
In a race against time, the Hell Divers may be the only obstacle to enemies bent on wiping out the final pockets of survivors and extinguishing the human genome forever.

While the Hell Divers cross an ocean to battle the machines, an old flesh-and-blood threat returns to the islands.
The mission to Rio de Janeiro ended in victory, but it came at a dire cost, killing most of those who set out to rescue the stranded survivors. Even worse, the skinwalkers’ leader, Horn, escaped with his demonic crew and is coming to take the throne.
Back at the Vanguard Islands, King Xavier Rodriguez has been severely injured in another battle to protect the kingdom. Now an infection threatens to kill the one man who can keep the peace. As he fights for survival, new intel from Rio de Janeiro gives humanity hope of destroying the biggest threat of all: the machines–if the machines don’t find the Vanguard Islands first.