Hand Made Mage by James Haddock
Requirements: .M4A/.M4B reader, 518mb
Overview: Ghost, a young Criminal Guild thief, is ordered to rob an ancient crypt of a long-dead Duke. He is caught grave robbing by an undead insane Mage with a twisted sense of humor. The Mage burns a set of rune-engraved rings into Ghost’s hand and fingers. Unknown to Ghost, these rings allow him to manipulate the four elements.

Returning to the Guild to report his failure, everyone thinks he has riches from the crypt, and they want it. While being held captive by the Criminal Guild, Ghost meets Prince Kade, the fourth son of the King, who has troubles of his own. Ghost uses his newfound powers to escape from the Guild, saving the Prince in the process.

Spies from a foreign kingdom are trying to kill Prince Kade, and Ghost must keep them both alive, while helping Prince Kade raise an army to stop an invasion. Ghost finds out trust too soon given is unwise and dangerous. He is learning people will do anything for gold and power. As Ghost’s power grows, his enemies learn he is a far more deadly enemy than anything they have ever faced.
Genre: Audiobooks > Fiction 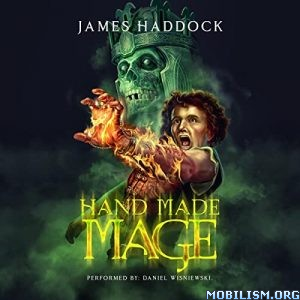