Grimm’s War (#1-4) by Jeffery H. Haskell / Narrated by Peter Berkrot
Requirements: .MP3 player, 1,63 Gb
Overview: USA Today bestselling author and award-winning journalist, Jeffery H. Haskell, lives and breathes writing. A passion of his from a young age, he can’t remember a time when he wasn’t telling stories. As a full-time author, he now pursues his life’s calling with the help of his amazing family. The only thing he likes as much as spending time with this family, writing, and speaking about writing, is helping other authors be successful. He will continue to write until he dies, possibly longer if allowed.
Genre: Audiobooks > Fiction / Science Fiction & Fantasy 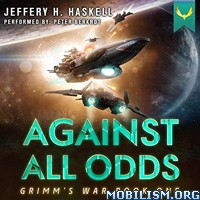 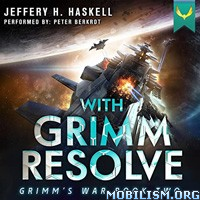 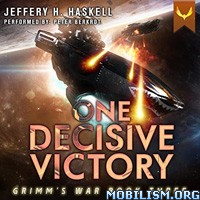 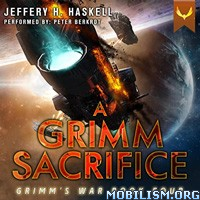 Against All Odds (#1) Wrong crew. Wrong ship. Right captain. Idealistic navy Lieutenant Jacob Grimm just wanted to honor his mother’s sacrifice in the last great war. When he’s forced to return fire and destroy a squadron of ships to save his own, he thinks he’s the hero….

Until they discover the ships are full of children. Disgraced and denied promotion, Jacob’s career is over. That is until the head of ONI needs a disposable officer to command a battered destroyer on the rim. There’s just one problem: Interceptor hasn’t had a CO in months, and the ship is a mess. Worse, the system he’s assigned to is corrupt and on the verge of all-out civil war with the Alliance.

However, no one told Jacob he was disposable. Pirates, smugglers, and Caliphate spies complicate the situation, and one captain with an old ship can’t enforce the law, let alone stop anyone.

The single greatest discovery of all time is about to change intergalactic politics forever. If Jacob doesn’t find a way to succeed, then it won’t just be the end of the Alliance, it will be the end of freedom for humanity.

From USA Today best-selling author Jeffery H. Haskell comes a military science-fiction epic in the tradition of Honor Harrington and Star Trek. If you love heroes and starships, you will love to stand with Commander Jacob T. Grimm against all odds. You’re in the navy now!

With Grimm Resolve (#2) It’s not the size of the ship in the fight, but the size of the fight in the ship. Jacob Grimm returns as CO of USS Interceptor just a few weeks after he graduated from command school. He’s immediately sent on a rescue mission to the far side of Zuckabar, with no backup and dwindling supplies.

When an unknown enemy cripples his ship on the outskirts of the system, the crew must come together and track their mysterious foe out into the unknown.

An incredible discovery leads them to another system. Trapped on the wrong side of a starlane with an enemy that outguns them and civilians to rescue, Jacob must push his crew to the very edge of their ability.

If he can’t, they will all die out in the black with no way to warn the Alliance of the new threat on their doorstep, and all two million souls on Kremlin Station will pay for his failure.

One Decisive Victory (#3) The Alliance needs to strike back, but the politicians are cowards. Admiral Wit DeBeck has a simple three-step plan to punch the Caliphate right in the nose and send a clear message.

Step one: Kick Lieutenant Jacob T. Grimm out of the navy and have him steal his own ship.
Step two: Infiltrate Caliphate space and mount a rescue mission on their slave distribution hub.
Step three: Get out alive.

The only ship that can do it has the only captain with nothing to lose. The Caliphate struck first, but Jacob is going to strike hardest.

Between stealing his own ship, Zuckabar separatists, and rogue pirates, the Interceptor has a gravcoil full of trouble before they even enter hostile space.

However, there’s a problem in orbit that Jacob doesn’t know about. Even if they can rescue the slaves, they may never leave the system.

If Jacob can’t find a way to succeed, then the Alliance is headed for a war they can’t win, and all of humanity will pay the price.

A Grimm Sacrifice (#4) In order to survive, Interceptor must change the rules. The Consortium is in real trouble. Caliphate Naval forces have stepped up their raids on the border planets and are taking people by the thousands. They can defend the wormhole, or they can defend their planets, not both.

Only the Alliance can help them, but will they? With the cold war heating up, the Alliance is forced to send light units to help. Lucky for them, the squadron of destroyers they free up includes Commander Jacob T. Grimm.

With Nadia off on a secret mission, and most of his officers reassigned, Jacob must face a new challenge— taking his ship into battle with wet behind the ear ensigns and midships.

From fires in the galley, to surprise attacks, the war is about to start in earnest. Interceptor can be the first casualty, or a sole survivor. For Interceptor to survive, the rest of her squadron must die.

Can Jacob find a way to save his squadron and warn the Alliance? Or will one final sacrifice be required?