Graves Box Set by L. E. Erickson (#0-3)
Requirements: .ePUB Reader, 761 KB
Overview: This is no love story… Discover the trilogy that readers are calling “cyberpunk at its best.”

Monstrous enemies on the mainland. Murderous plots on the city-ship that was supposed to be her salvation. Trapped between the two, a refugee with illegal abilities joins a criminal gang trying to put an end to a corrupt government’s deadly machinations. Ardica City is supposed to be a safe haven. For Daria Novotny, disaffected wielder of an outlawed ability, it’s anything but. Daria and her family are forced to seek refuge on a high-tech city-ship whose government would lock her up just for being who she is. When Daria rebels against her law-abiding brother and resorts to theft to feed her family, she winds up with blood on her hands and is coerced into joining a criminal gang known as Graves. Surrounded by people she’d like to trust and is sure she shouldn’t, Daria does her best to do as she’s told and avoid trouble. But when military crackdowns endanger lives, she must learn to take a stand—before she and others like her lose more than just their freedom…

A dystopian cyberpunk thriller with interesting characters, engaging world-building, and a plot that twists and turns in a pleasingly unpredictable manner.
Genre: Fiction > Sci-Fi/Fantasy 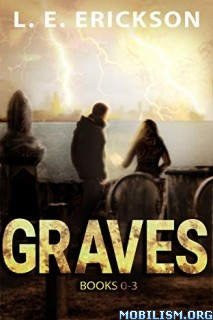 0. Break
These monsters are real.

Daria’s family lives on the mainland, because the alternative is a city that will lock her up for being born different. In the nooks and crannies between the walls of the Necropolis Zone, they carve out a life that’s hard but free.

But monsters live on the far side of the miles-wide maze of graveyards. And when those monsters inexplicably invade, Daria and her family are left with no choice—it’s flee or die. Whatever the outcome, one thing is certain.

No one gets out of this unscathed.

1. Resistance
Caught in the middle, there’s no such thing as innocent.

Ardica City was supposed to be a safe haven. For Daria Novotny, who secretly wields an outlawed ability, it’s anything but.

Daria and her family are refugees on a high-tech city-ship, struggling to cope with what, and who, they were forced to leave behind on the monster-infested mainland. Complicating matters is Daria’s hidden identity—if the government finds out what Daria is, they’ll lock her up. Worse, she’s starting to fear it might be her own brother who’ll eventually sell her out.

When Daria resorts to theft to feed her family, she winds up with blood on her hands and is forced to cut a deal with a charismatic criminal boss. Soon, Daria is breaking the law on his behalf, at risk of getting caught every time she uses her ability. Worse, she finds herself wanting to trust the gang she’s fallen in with, even though she knows the men and women of Graves are dangerous people.

Except that everything Daria believes keeps getting proved false, and the longer she runs jobs for Graves, the less certain she is that they’re really the bad guys. When military crackdowns endanger lives, Daria has to decide once and for all where her loyalties lie—before she and others like her lose more than just their freedom.

2. Riot
There’s the right way. And then there’s the Graves way.

They started a riot. Now the disparate gang of wannabe revolutionaries known as Graves has to figure out how to harness the fury they unleashed—before it destroys them, too.

Daria and company set out to rally Ardica City’s underground, but they’re plagued by opposing viewpoints and shifting loyalties within the gang. To stand any chance of ending the corrupt government’s reign of terror, Daria needs to figure out who can be trusted—because the enemy is onto Graves, now, and deadly traps are being set.

3. Revolution
The revolution didn’t begin with Daria Novotny. But she damn well intends to finish it.

A retaliatory strike by Ardica City’s corrupt military leaves Graves splintered and near-defeated. The survivors must attempt to make good their escape and rescue those still trapped on the city-ship. But their leaders are desperately faking it in hopes of making it, friendships are unraveling, and the odds are stacked against them.