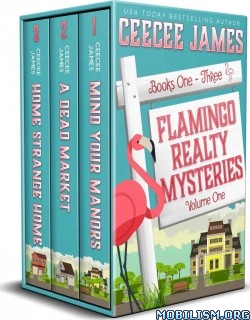 1. Mind Your Manors
Meet Stella O’Neil, retired FBI agent Oscar O’Neil’s granddaughter. She’s got a lot on her plate, trying to figure out her crazy, stubborn family, the hidden secrets that caused her grandfather’s estrangement from her dad, and starting out as a realtor. Throw in a dead body found in what used to be the town’s "royalty" family’s manor, and she’s neck deep in a mystery. She may be sweet, but she’s pretty stubborn herself.

2. A Dead Market
Stella O’Neil finally has her first listing! A cute cabin with a gorgeous lake on eighty acres of breathtaking land. There’s just one tiny problem: the body floating in the lake. If that weren’t unsettling enough, her phone rings off the hook with hundreds of potential buyers. In fact, the property is overrun with them! Stella digs out the truth that the lake is the obscure clue in an old legend that has been solved on the Internet. But if only her troubles stopped there. She runs into one buyer who won’t take no for an answer. He seems to have way too much personal information about Stella herself, but the police refuse to take the threat seriously. As mishaps continue to develop, she is certain that she being hunted by someone with some sort of grudge against her. Stella has to solve the murder and figure out the riddle so she can untangle herself from this legal and personal mess… before things go too far.

3. Home Strange Home
When Stella’s uncle drags her to a surprise party for Ian Stuber, no one is more surprised than the man of the hour–who promptly drops dead. But when it’s determined something more sinister is at play, Stella is dragged into the investigation as one of the witnesses, and the search is on to discover not only WHO committed the murder, but HOW… after all, the room was packed with party goers. Sniffing out a killer is a hard enough task by itself, but when you add to the fact Stella’s own family keeps stonewalling her every move to search for her missing mother, it’s no wonder Stella is about to lose her mind. She’s soon learning that if she wants answers, she’s going to have to find them herself. Can Stella capture Ian’s killer before he strikes again? Or will the next bullet be for her?