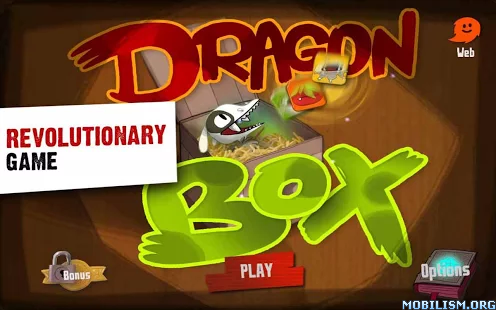 USA today: "brilliant, kids don’t even know that they are doing math"
Wired: "DragonBox is making me reconsider all the times I’ve called an educational app "innovative.""
Forbes: "Step aside sudoku, algebra is the primordial puzzle game."
"My son jumped right into the game. About an hour and a half later he was solving junior high level algebraic equations. Amazing."

DragonBox introduces the main math elements in a playful and colorful world that appeals to children. The game features a gradual learning of fundamental algebraic elements (equal sign, zero, multiplication, division, parenthesis, negative numbers, fractions, …).
The player learns at his/her own pace, experimenting with rules that are introduced step by step. Progress is illustrated with the birth and growth of a dragon for each new chapter.
This game primarily targets children from 6 to 16 who are willing to discover algebra or to consolidate past learning and gains. Playing doesn’t require supervision, although parents can help making the learning more efficient and transferring learned skills in real life. It is a great game for parents to play along with their kids – and freshen up their own math skills.
DragonBox is based on an original concept developed in Norway, introducing a novel pedagogical method based on discovery and experimentation. The game greatly helps children to make it up with math, and contributes to sharpen their desire to learn and to be successful with math.
This game is the subject of extensive research at the Center for Game Science of the University of Washington.
DragonBox has received many distinctions, and among others, the Gold Medal of the 2012 Serious Play Award (USA) and the Best Serious Game at the 2013 IMGA Awards. It is recommended by Common Sense Media.

Features
* 10 progressive chapters (5 learning, 5 training)
* 200 puzzles
* Suggested (and not put forward) rules the child can experiment with
* Multiple profiles for easy progress control
* Dedicated graphics and music for each chapter
* 16 supported languages (English, français, norsk, svenska, dansk, español, 한국어, italiano, português, Deutsch, русский, 简体中文, 繁體中文, suomi, nederlands, euskara)
Testimonials
"Brilliant – My 7-year-old son has now grasped pre Algebra because of this app."
"Unbelievably engaging for kids… – I was hoping for the best with this app and wasn’t disappointed. Totally teaches algebra without them even realizing it. Awesome!"
"My 12 year old can do algebra because of this program, and her 8 year old sister wants to try it."
"This is definitely the most intuitive math learning program since Algebra Touch"
"I’m not dumb. Fluent in 7 languages. No problems with Chemistry, physics or even Trigonometry. Just. Not. Algebra. No teacher or friend ever managed to get through to me. Even though I fully understood that it is more about following the rules than understanding.. Very, very frustrating. Gave this a try for a dare. Spent one hour playing and halfway through the bonus levels I was already solving them in my head.. I’m shocked and amazed. Don’t know wether to laugh or cry hysterically. Thank you. A HUGE weight has just dropped of my shoulders. I feel a foot taller. Thank you SO much! I still can’t believe it…"
"Through this simple game, I have started to see math in a new light. Thank you for writing this excellent app!!!"

What’s New:
1.3.6
This release ensures that solving the last puzzle of a chapter properly unlocks the next one. It also cleans the parent area. If you like our products, why not help spread the word? You can do so on social media and by leaving a nice review, even if you did it with a previous version of the app. It really helps us!

This app has NO advertisements