Devastation: The Pathfinders by Jane Dougherty
Requirements: .ePUB reader, 4.1MB | Retail
Overview: One problem with jumping down wormholes is you’ve no idea where you’ll end up. Another is the psychotic celestial beings who might decide to follow you.

The end has finally come for the shopping mall, the Flay tribe and possibly everything else too. Carla, Tully and their friends have taken the only way out-another wormhole. It drops them in Lutecia, a city in a parallel world, where everything is green, society is peaceful and they learn to develop their innate psychic talents. They are taught the true history of the universe, what Wormwood has done to Carla’s dad and what he’s really after. Unfortunately, one of the things Wormwood is after is Carla and Tully.

The Sages of Lutecia form a desperate plan. Carla and Tully will lure Wormwood to the gateway to Hell, before he and his souleaters reduce this world to the same dead wasteland as ours. Once they have him on the brink of the pit, all they have to do is push him in. Simple. Well…not really.

Pursued by Wormwood’s gray men, golems and his army of dead souls, Carla and Tully travel the star paths, looking for Carla’s mother in the Himalayas of our dying world-hoping to catch her in a dream, hoping she’ll be able to release Carla’s dad from possession and hoping Wormwood doesn’t find his third companion, Eblis Azazel, the angel of destruction, whose trumpet will sound the apocalypse in all the worlds.
Genre: Fiction > Children/Young Adult 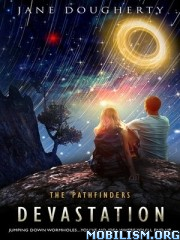