Creed by Fel Fern (Gates Brothers #1)
Requirements: ePUB reader, size 511KB
Overview: In a city which eats up weaklings like him, Omega wolf Luke Weaver has kept his head down for most of his life. After running into a violent gang of hyena shifters, Luke thinks it’s the end for him until a mysterious savior appears. Everyone knows who Creed Gates is. He owns this city and everyone living inside it. Luke plans to show the arrogant Alpha he has claws but the more time he spends with Creed, the more his heart wavers. Creed Gates had one goal. To avenge his murdered brother. Finding his fated mate had never been part of the big picture, until he stumbles upon the Omega being ganged up in an alleyway. Luke’s skittish, scared but Creed’s a patient man. The mating call between them is strong, undeniable. Creed will show his mate that once an Alpha find his mate, he’ll do whatever it takes to protect and possess him.
Genre: Erotic Paranormal Romance 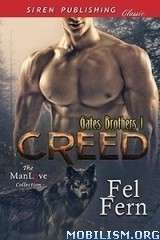