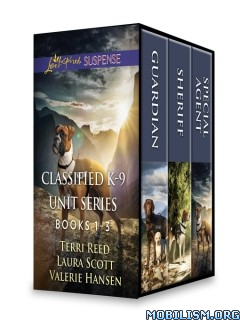 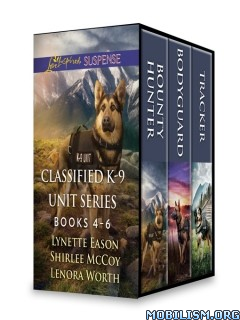 1. GUARDIAN
When a fellow FBI agent is kidnapped and a protected witness vanishes, Leo Gallagher will stop at nothing to find them both. So when he discovers a link between the case and a single mother in Wyoming, Leo and his trusty K-9 partner rush to question Alicia Duncan. Could she be the key to locating the missing persons? Not if a killer has anything to say about it.

2. SHERIFF
Witnessing a prison break, FBI agent Julianne Martinez is within seconds of death…before she’s rescued by the one man she thought she’d never see again. She’d know her long-ago love, Brody Kenner, anywhere, even with a sheriff star on his chest. But partnering with Julianne to solve two cases only leads to danger when the hunted becomes the hunter. This is a mission that cannot fail…because Brody lost Julianne once, and he won’t lose her again.

3. SPECIAL AGENT
When Special Agent in Charge Max West and his K-9 partner, Opal, look into a series of bombings in Northern California, horse trainer Katerina Garwood instantly seems suspicious. As the ex-fiancée of a man tied to the criminal Dupree family, Katerina may know more than she’s letting on—especially since the infamous syndicate is targeting her. With the criminals closing in, Max must separate the truth from lies, or he and Katerina may not live to share tomorrow…

4. BOUNTY HUNTER
While on a mission to bring his sister’s killer to justice, bounty hunter Riley Martelli spots a missing FBI agent in a Colorado national park. When he calls in the tip, he’s joined in his search by Special Agent Harper Prentiss. Harper, aided by her faithful German shepherd, is determined to locate the missing agent…without falling for the charms of the handsome bounty hunter.

5. BODYGUARD
Close to bringing the Dupree crime family that murdered his parents to justice, FBI agent Ian Slade wants to track the leader—not protect the man’s niece. But with Esme Dupree’s uncle determined to silence her before she can testify against her brother, Ian and his K-9 partner are duty-bound to guard her. Now he must choose between the vengeance he’s craved for so long and a future rich in hope.

6. TRACKER
Single mother Penny Potter has spent months in hiding to keep her toddler from his father, a rogue FBI agent turned fugitive. When he corners Penny in the Montana wilderness and gets away with their son, she’s forced to trust his brother, handsome FBI K-9 agent Zeke Morrow. Zeke must decide where his loyalty lies: with his sibling or the woman he wasn’t supposed to fall for.