Chaos Queen series by Christopher Husberg (books 2&3)
Requirements: .ePUB reader, 3.1MB
Overview: Chris currently lives in Provo, Utah, where he spends his time writing, reading, writing, hiking, writing, playing video games, and hanging out with his wife, Rachel, and daughter, Buffy. When the writing gets tough, he considers resorting to another master’s degree, or heaven forbid a PhD, at whatever university will let him concentrate on gender and pop-culture studies in the television show Buffy the Vampire Slayer…but then he remembers how much he loves what he does, and writes some more.
Genre: Fiction > Sci-Fi/Fantasy 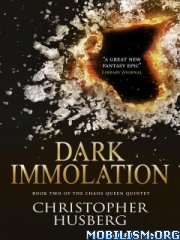 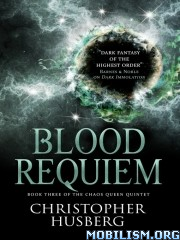 #2 – Dark Immolation
A new religion is rising, gathering followers drawn by rumors of prophetess Jane Oden. Her sister Cinzia—once a Cantic priestess—is by her side, but fears that Jane will lead them to ruin. For both the Church and the Nazaniin assassins are still on their trail, and much worse may come.
Knot, his true nature now revealed if not truly understood, is haunted by his memories, and is not the ally he once was. Astrid travels to Tinska to find answers for her friend, but the child-like vampire has old enemies who have been waiting for her return. And beyond the Blood Gate in the empire of Roden, a tiellan woman finds herself with a new protector. One who wants to use her extraordinary abilities for his own ends…

#3 – Blood Requiem
The Nine Daemons are on the rise.
Once believed dead and gone, Daemons have found a way back into the world. But the only people who can withstand their assault are spread across the face of the Sfaera.
Free at last from the influence of assassins and emperors alike, the psimancer Winter sails back to her hometown—only to find a new trouble stirring. Meanwhile, the heretic sisters Jane and Cinzia Oden are beset by supernatural attacks. And soon their allies, the vampire-girl Astrid and the former assassin Knot, must face the terrifying Black Matron.
As new battles are fought, the Daemons creep ever closer to freedom, and the legend of the Chaos Queen may soon be made anew.