Trivia Crack (Ad free) v2.70.0 [Paid]
Requirements: 4.1+
Overview: From the creators of Aworded arrives Trivia Crack, the amazing quiz game that lets you test your knowledge and challenge your friends to see who is the smartest! 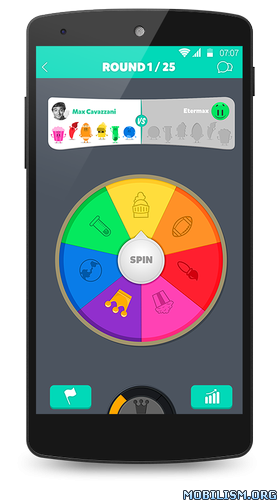 Have fun challenging your friends and enemies in the hottest trivia game!

Let our friendly spinner wheel, Willy, select which questions you’ll answer from six different categories. Be the first to get the six crowns to win, but watch out for the rematch!

Reasons you should be playing Trivia Crack right this second:
– Hundreds of thousands of exciting questions
– You can create your own questions in the Factory
– Over 20 game languages
– Chat with your opponents
– Collectable card collection

Need more? No problem:
– Prove how smart you are
– Learn something new while having fun
– Make your mother proud

So what are you waiting for? Let’s go! Download the game!

Warning: this game may cause an excess of fun. Please consult a professional if you notice your knowledge growing at an unusual rate.

Questions? Concerns? Find the solution to all your problems here: support.etermax.com.

Prune v1.1.3 (Paid)
Requirements: 2.3.3+
Overview: Prune is a love letter to trees. A game about the beauty and joy of cultivation. 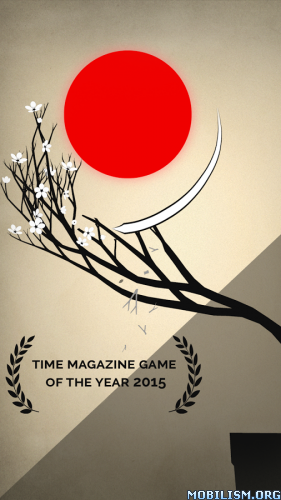 With a swipe of a finger, grow and shape your tree into the sunlight while avoiding the dangers of a hostile world. Bring life to a forgotten landscape and uncover a story hidden deep beneath the soil.

• A unique digital plant for your pocket
• Beautiful, minimalist art and a super clean interface—it’s just you and the trees
• Meditative music and sound design for you to zen out to
• No IAP, no monetization strategy, no currencies
• Share screenshots of your unique tree creations with friends
• Synchronize progress across all your devices using iCloud

Originally based on an experimental tree generation script, Joel McDonald carefully crafted Prune to perfection over the course of a year. Kyle Preston joined in to add his unique musical signature and sound effects.

Merge Dragons! v2.9.1 (Free Shopping)
Requirements: 4.1 +
Overview: Discover dragon legends, magic, quests, and a secret land of entertainment and mystery in the world of Merge Dragons! where you can combine everything into better and better things by matching! 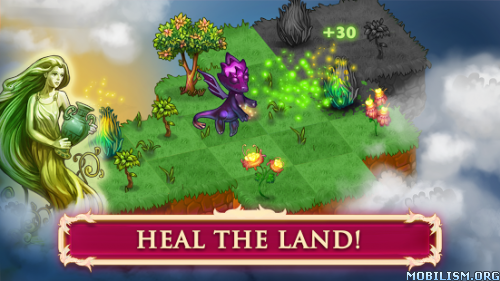 In a mystical world hidden among the clouds, the vale of Dragonia flourished. Then evil Zomblins cast a void across the vale. The only hope to heal the land rests in YOUR magical power to MATCH ANYTHING — dragon eggs, trees, treasures, stars, magical flowers, and even mythical creatures.

Match eggs to hatch helpful dragons, then evolve them to discover more powerful dragons! Figure out challenging puzzle levels: match the Gaia statues to win, then bring rewards back to your Camp to collect and grow.

What will you discover as you match your camp to perfection and nurture your dragons?

== Match Objects ==
• Discover over 500 fantastic objects to match and interact with.
• Freely drag objects around the beautiful world and match 3 of a kind evolve them into better things!
• Match nearly anything – plants, buildings, coins, treasures, fallen stars, magic objects, mythical creatures, and more!
• Match Life Essence and tap it to unleash power to heal the vale!
• Discover the Gaia statues stuck in each level’s cursed land. Match them to solve the puzzle and create life!

== Collect New Dragon Breeds ==
• Discover 17 dragon breeds who live in the vale, and evolve them through 8 growth stages for new dragons!
• Match eggs to hatch helpful dragons who will roam the vale and harvest objects for you to use or match.

== Tricky Puzzles ==
• Over 600 quests to challenge your mind!
• Test your puzzle solving skills in more than 140 tricky levels filled with new quests and rewards to help you build your dragon camp!
• Discover hidden levels – can you find them all?
• On your puzzle journey, you may cross paths with evil Zomblins. Watch out and be careful!

WHAT’S NEW
– You’ll soon be able to play our Magic Moon Event, and will meet the mystical Moon Dragon! You’ll also be able to get the Martian Dragon from the store.
– This version brings all new Premium Land for you to explore – note that you need to have discover the first premium land in order to get the latest.
– Locked chests now have unique visuals. This will make merging far simpler! 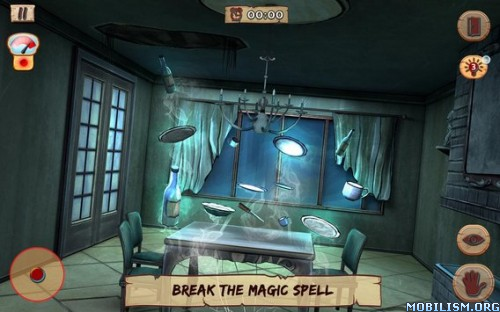 Once there was a serial killer who lurked at night, sneaking into homes and finding his victims. He was pure evil with a heart of black coal. After each kill, he would take a ‘token’ to remember his victims. One night after leaving the scene of his latest murders, he was hit by a car and killed. His token was a child’s doll, and it was left on the side of the road. No one knows that this ruthless killer latched his soul onto the doll and was born again. Even though his body is a child’s doll, he is still the same dangerous killer.

The scary child can take the form of his doll or as a ghost, making it especially difficult to face him. He can bite, kick, scratch, and hurt you. You have to defeat each room to undo the magic in the whole house and free the child from the ghost.

You can collect various items during different levels that are stored in your inventory and can be used in next levels of rooms. If Scary Child bites you, you will be dead. You can restart the level through relive feature. Find the keys for different rooms of this haunted house and complete all the missions step by step. Don’t make noise otherwise Scary Child will hear the sound, come out and kill you. Your ultimate mission is to finish this scary child ghost.
Now let’s dare to play this horror game of 2018 !!

Weave the Line v2.2.0 (Mod Money)
Requirements: Android 4.1+
Overview: Drag any line to a point, and divide it into two new lines; the new lines can also be divided. Again and again, a few lines can weave countless wonderful patterns. 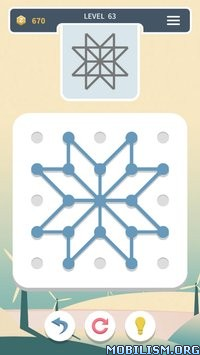 Some patterns look simple but intriguing, others look complicated but regular. You just need to observe and try, and you will enjoy a series of joys !

Features:
– Three game modes:
• CLASSIC: base on core gameplay
• MIRROR: each line displays a mirror
• 2 COLORS: two types of lines need to be controlled
– A total of 265 challenging levels

Agent A: A puzzle in disguise v4.0.3 (Paid)
Requirements: 4.4+
Overview: The first instalment of the Agent A series is here with free updates and more missions coming soon!
4/5 Touch Arcade "This is one of the most playable and least frustrating adventure games I’ve played, and it speaks to the strength of the game design that it is great."
AppUnwrapper "Agent A feels like something really special." 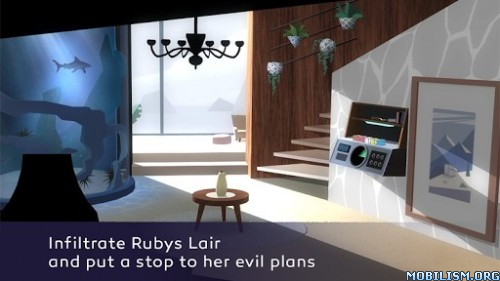 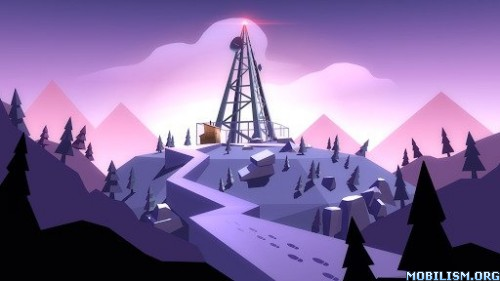 Agent A, your new mission has just arrived from headquarters. As usual destroy this transmission once received. This mission is of the utmost importance so get to it effective immediately.

MISSION:
Ruby La Rouge. Known enemy spy and perilous predator has been targeting our secret agents. Your mission is to find and capture this vindictive vixen. She’s been on our radar for some time now, however intel revealing her motivations is unclear.

We need you to follow Ruby, then locate and infiltrate her secret lair. Once inside it is imperative that you uncover her plans.

Oh and agent… do be careful. Miss La Rouge has a taste for dismissing agents such as yourself.

From the creators of Tasty Tadpoles comes ‘Agent A: A puzzle in disguise’, a spy themed puzzle game for smart phones, tablets and erm… Shoephones?!

You play as Agent A, your mission (should you choose to accept it) is to infiltrate the secret hideout of Ruby La Rouge and apprehend or neutralise the target.

Uncover a stylish 60s themed world full of retro futuristic contraptions, hidden gizmos, gadgets and clever logic based puzzles. But do be warned… Ruby La Rouge is no spy to be taken lightly! Explore a labyrinth of perplexing puzzles in this quirky game of cat and mouse that’ll have you wondering whether you’re the cat… or the mouse!!

Notice something strange or out of place? Making mental notes and observations (like a good secret agent) will aid you in solving tricky puzzles later on. As you explore Rubys secret hideout, collecting objects and using them cleverly is crucial in unlocking a trail of puzzles leading you ever closer to your target!

Agent A features:
* Stylish 1960’s inspired art
* 15 rooms to explore, 30 inventory based puzzles and 20 puzzle screens
* 7 achievements to collect, for the trophy hunter in all of us

Are you clever enough to outsmart Ruby? Slip into the exciting world of espionage with Agent A now!

Chapter 5 news.
We’re half way through development of Chapter 5 ‘The Final Blow’ and can tell you it’s looking amazing! Expect it out later this year agents 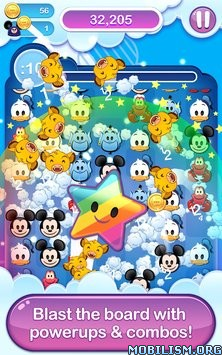 WHAT’S NEW
EMPERORS, LLAMAS AND SQUIRRELS – OH MY!
The all-new Emperor’s New Groove Item Card Event is here! Complete the 5-day event for your chance to pull either Kronk or Kuzco out of the Diamond Box.

YOUR ROYAL HIGHNESS, TIANA, HAS RETURNED!
Calling all culinary experts! Get cookin’ in the latest 3-day Food Fight Face-Off Event! Compete against Blitzers around the world for your chance to win Princess Tiana!

This app has No advertisements 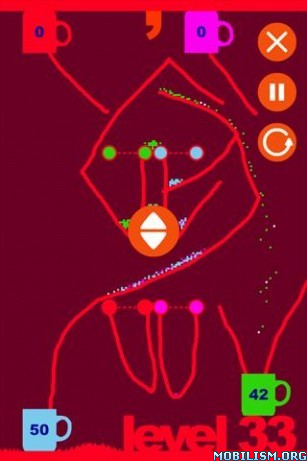 The popular browser puzzle game is now on mobile, with new and more levels!

"A simple idea so sweetly designed your cup will soon overfloweth with fun, ‘Sugar, Sugar’ plays like a game that was meant to be on the touch screen all along; the production is seamless and well suited for players of every age" – jayisgames.com

Draw to direct enough sugar in all the cups in each of the 55 levels. (yes 20 new levels were added in the last update!)
Draw anything you want and direct the sugar anywhere you want in the bonus sandbox mode.

Sugar, Sugar is a bontegames game by Bart Bonte, , the game you know from coolmath, hoodamath and many other gamesites, but completely redesigned for mobile with new graphics and many new levels.

Gardenscapes – New Acres v2.5.2 [Mod Money]
Requirements: 4.0.3+
Overview: Welcome to Gardenscapes! Rake your way through a storyline full of unexpected twists to restore a wonderful garden to its former glory! 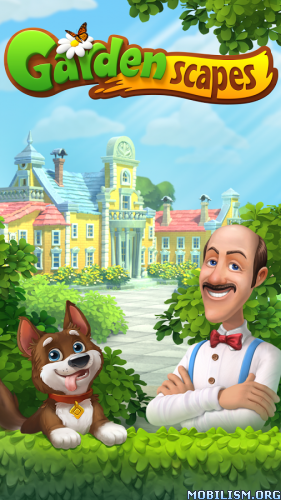 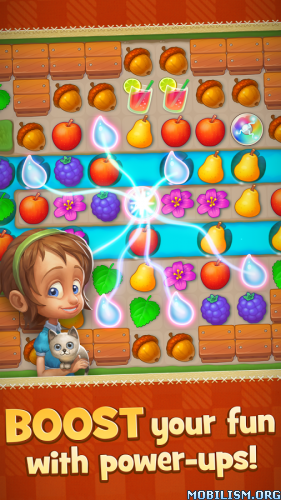 Embark on an adventurous journey: beat match-3 levels, restore and decorate different areas in the garden, get to the bottom of the secrets it holds, and enjoy the company of amusing in-game characters, including Austin, your butler! What are you waiting for? Build your dream garden!

The game features:
* Unique gameplay: swap and match, restore and decorate the garden, and enjoy a novel storyline—all in one place!
* Hundreds of unique match-3 levels
* Dozens of in-game characters you can make friends with
* A lovely pet that is always there to cheer you up
* An in-game social network you can use to keep up on all the latest
* Different areas in the garden with unique structures: broken fountains, mysterious mazes, and many more
* A community that comes first—become neighbors with your Facebook friends!

NEW ADVENTURES
– Business partners Colin and Robbie are restoring a house
– Unveil the mystery behind a ghost
– A decoration with a story to tell: why is there a Polynesian totem in the garden? 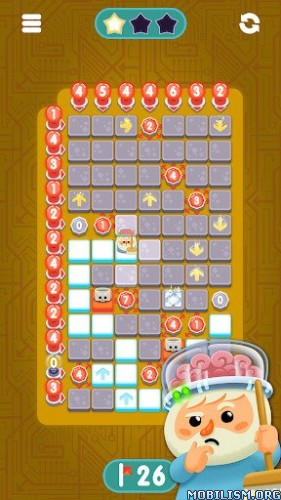 Help Aristotle – the genius with a broom – sweep the minefield to regain his memory and escape from the aliens’ scientific experiments, discovering where all the bombs are hidden.

HOW TO PLAY:
• Read the numbers to calculate how many mines there are in each column and each line
• Flag the tiles which contain a mine
• Then move the sweeper genius to the portal!