Can’t get enough by K. Hunter
Requirements: .ePUB reader, 1 mb
Overview: Snow surrounded the cabin, a little light beamed through the window above the door. Natalie Atkins looks at the light. She felt trapped in this cabin. She watched a tall, sexy and handsome man, who moved around the cabin, looking for supplies. Julian De Long’s was a tall, sexy and handsome man with a voice that made her rethink her engagement to Marcus Phillips.
Genre: Fiction > Romance 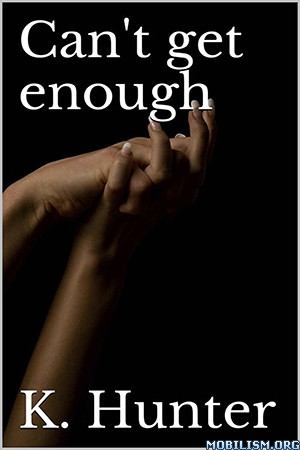 Julian’s could not help wanting to be near her. She had him twisted all up inside. When he danced with her at the gala, she felt like she was made just for him. But he was in a relationship that he was fond of. He needed to know if she felt the same.

She froze as he moved closer to her. She moved back until she hit the wall. Her heart pounded in her ears. He placed his hands against the wall as he held her in place. She licked her lip as she looked into his eyes. He leaned into her body as his face was inches from hers.
“Please do not fight me on this?” he asked as his lips lay at her mouth.

His deep voice and his words shook her to the core. He kissed her slowly then he saw that she was not fighting then he kissed her deeply as he touched her cheek. She did not move her hands from the wall. She did not trust her body. Leon took her face in both of his hands and tasted every inch of her mouth. Natalie had to stop him before they end up naked.