Canaris: The Life and Death of Hitler’s Spymaster by Michael Mueller
Requirements: ePUB Reader, 12 MB
Overview: Admiral Wilhelm Canaris was the head of the Abwehr Hitler’s intelligence service from 1935 to 1944. Initially a supporter of Hitler, Canaris came to vigorously oppose his policies and practices and worked secretly throughout the war to overthrow the regime. Near the end of the war, secret documents were discovered that implicated Canaris and hinted at the extent of the activities conducted by Canaris’s Abwehr against the Hitler regime, and in 1945 Canaris was executed as a national traitor. But Canaris left little in the way of personal documents, and to this day he remains a figure shrouded in mystery.
Genre: Non-Fiction, Biographies & Memoirs 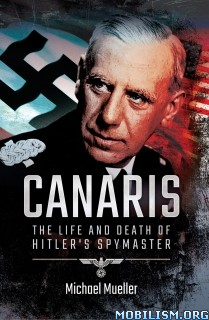