Born Assassin Saga Box Set by Jacqueline Pawl (#0.5,1-3)
Requirements: .ePUB Reader, 1.3 MB
Overview: Rule #1: Above all, an Assassin is cruel, cold, and ruthless. Rule #2: An Assassin is never, under any circumstance, an elf. Until Mercy.

Seventeen years after being given to the ruthless Assassins’ Guild, Mercy will do anything to prove her worth to the headmistress of the Guild . . . but her cruel tutors and fellow apprentices will stop at nothing to keep from being bested by an elf. Her mission? Kill the prince.

The mad king’s court is a web of deadly secrets, blackmail, and strange supernatural occurrences. If she can find a way to assassinate the prince before the cutthroat courtiers discover her true identity, she’ll earn her place as the greatest Assassin the Guild has ever trained. If not, it’ll be more than her pride on the chopping block. 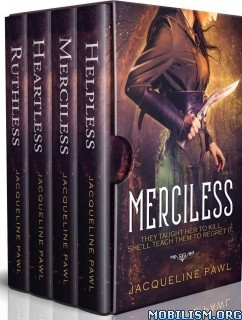 0.5 Helpless
Ghyslain—a brokenhearted young king who will give anything to help his people. Liselle—an outspoken slave who serves the country’s future queen. Together, they could change the kingdom for the better . . . or tear it apart.

After the sudden death of beloved King Alaric, Prince Ghyslain is thrust before the eyes of the nation in an unexpected—and undesired—coronation. With the future of his new kingdom resting heavily upon his shoulders, Ghyslain wants nothing more than to do the one thing his father never dared during his rule: to free the elven slaves. In a city plagued by racial tension, opposing the demanding, cutthroat advisors and courtiers seems an impossible task until Ghyslain meets Liselle, the one woman who is brave enough to stand against them all.

1. Merciless
After being taken by the illustrious Assassins’ Guild when she was one week old, Mercy has endured seventeen years of grueling training in the art of killing. She is covered in more scars than she can count–gifts from her cruel tutors and the human apprentices who do not tolerate being bested by an elf–and she’s more than ready to prove her worth to the head of the Guild.

In the capital city of Sandori, elf-human violence runs rampant and a king mad with grief rules with an iron fist. All that stands between Mercy and her chance to become the greatest Assassin the Guild has ever trained is the handsome and kind Prince Tamriel. If she succeeds in killing him, she will earn the respect and admiration of her childhood tormentors and will be immortalized in the Guild. Faced with political tension, rampant disease, and strange supernatural occurrences, Mercy realizes that her actions not only affect her and Tamriel, but that the fate of the kingdom hangs in the balance.
Kill the prince . . . or die trying.

2. Heartless
Still reeling from the Assassins’ deadly attack, Mercy, Tamriel, and Calum have no choice but to venture to the wild and war-torn Cirisor Islands for the one ingredient which may cure the deadly plague sweeping the country. They have no idea what they will face in the land of the fabled elves, except that the brutal Cirisians do not hesitate to kill any humans who trespass into their territory.

When secrets, betrayals, and misplaced trust threaten to tear their group apart, Mercy finds herself caught between her desires to protect Tamriel and to expose Calum’s crimes—secrets the sharp-tongued blacksmith will kill to keep hidden. After a Cirisian clan leader takes them hostage, the three of them must work together to ensure that Cassius Baccha’s vision of the cure comes to fruition. They’ll do anything to save Tamriel’s people and right the wrongs the mad king has committed, but first, they have to survive the Islands—and each other.

3. Ruthless
Defy the court. Find the cure. Win the war.

After their grueling, death-filled journey to the land of the bloodthirsty Cirisian elves, Mercy and Tamriel have returned to the capital with their two desperate hopes for curing the plague: Niamh, an immortal with ties to the Old Gods; and the Cedikra, a rare medicinal flower which could save Tamriel’s people—if they can figure out how to use it before the king’s court tears them apart.

Meanwhile, war is brewing in the Cirisor Islands. Under the thrall of his cruel, cunning father, Calum can do nothing but watch as Firesse assembles an army unlike any before. Armed with unnatural magic, deadly Assassins, and world-class weaponry, the Cirisians will stop at nothing to make the humans pay for the mistreatment of their ancestors. Unable to speak, unable to act, Calum must find a way to break free of his captors’ grasp before Firesse destroys everyone and everything he loves.