Bold Venture : The American Bombing of Japanese-Occupied Hong Kong, 1942–1945 by Steven K. Bailey
Requirements: .PDF reader, 12MB
Overview: Bold Venture tells the nearly forgotten story of the American airmen who flew perilous combat missions over Hong Kong during the Second World War. Steven K. Bailey sheds new light on the American military campaign against Japanese forces in occupied China. From the first reconnaissance flights over Hong Kong by lone pilots in 1942 to the massive multi-squadron air strikes of 1945, he describes the complex history of American air operations in the China theater and paints an indelible portrait of the American air raids on Hong Kong and the airmen who were shot down over the city.

Today unexploded aircraft bombs are unearthed with frightening regularity by construction crews in Hong Kong. Residents are eager to know where these bombs originated, who dropped them, when, and what the targets were. Bailey’s account answers some of these questions and provides a unique historical perspective for Americans seeking to understand the complexities of military involvement.
Genre: Non-Fiction > History 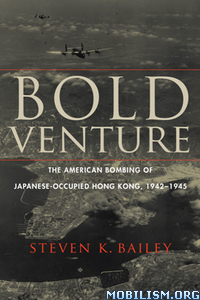