Blood, Guts and Gore: Assistant Surgeon John Gordon Smith at Waterloo by Gareth Glover
Requirements: .ePUB reader, 15 MB
Overview: John Gordon Smith wrote one of the most vivid, honest and readable personal accounts of the Battle of Waterloo and the ensuing campaign, where he served as a surgeon in the12th Light Dragoons, but his classic narrative was only published in a limited edition in the 1830s and since then it has been virtually unknown. His warts-and-all depiction of the British army in Belgium and France and the fighting at Waterloo rivals many of the more famous and often reprinted military memoirs of the period. That is why Gareth Glover, one of the foremost experts on the battle and the archive sources relating to it, has sought to republish the narrative now, with a full introduction and explanatory notes.
Genre: Non-Fiction > History 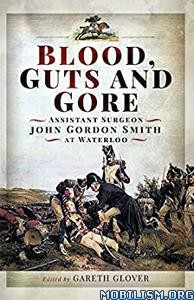