Barsoom Series Collection: 7 John Carter Stories by Edgar Rice Burroughs
Requirements: MP3 Player, Quality: 64 kbps, Duration: 54 hrs 15 mins, 1,3 GB
Overview: Barsoom Series Collection: 7 John Carter Stories is an audiobook collection of seven novels/stories of John Carter by Edgar Rice Burroughs. It will transport you to a fascinating new world unlike any other. Join John Carter as he finds himself on another planet beyond his deepest imagination – Mars, with almost a complete lack of resources.
Edgar Rice Burroughs’ writings are inspired by a number of science-fiction writers and even some scientists who were dedicated to learning more about extraterrestrial life and ventures in space exploration. This infamous, well-written piece of literature by Burroughs has also been adapted by a number of writers in short stories, novels, films, and comics. Enjoy these must-hear novels in a beautifully narrated audiobook. It includes:
1. A Princess of Mars
2. The Gods of Mars
3. The Warlord of Mars
4. Thuvia, Maid of Mars
5. The Chessmen of Mars
6. The Master Mind of Mars
7. Yellow Men of Mars
Follow John Carter as he travels through the desolate landscape of Mars. Experience adventures full of feats of daring and dazzling swordplay!
Genre: Audiobooks, Sci-Fi, Fantasy 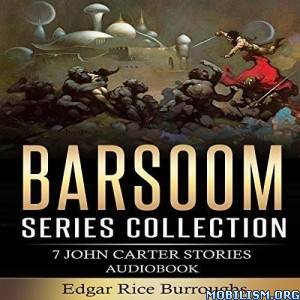