Backcountry Ghosts: California Homesteaders and the Making of a Dubious Dream by Josh Sides
Requirements: .ePUB reader, 3 MB
Overview: California is an infamously tough place to be poor: home to about half of the entire nation’s homeless population, burdened by staggering home prices and unsustainable rental rates, California is a state in crisis. But it wasn’t always that way, as prize-winning historian Josh Sides reveals in Backcountry Ghosts.

In 1862 President Abraham Lincoln signed the Homestead Act, the most ambitious and sweeping social policy in the history of the United States. In the Golden State more than a hundred thousand people filed homesteading claims between 1863 and the late 1930s. More than sixty thousand Californians succeeded, claiming about ten million acres.

In Backcountry Ghosts Josh Sides tells the histories of these Californian homesteaders, their toil and enormous patience, successes and failures, doggedness in the face of natural elements and disasters, and resolve to defend hard-earned land for themselves and their children. While some of these homesteaders were fulfilling the American Dream—that all Americans should have the opportunity to own land regardless of their background or station—others used the Homestead Act to add to already vast landholdings or control water or mineral rights.
Genre: Non-Fiction > Biographies & Memoirs 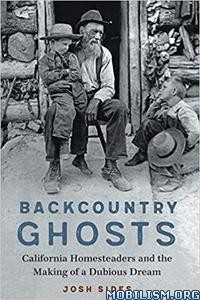