Atlantic: Great Sea Battles, Heroic Discoveries, Titanic Storms,and a Vast Ocean of a Million Stories by Simon Winchester
Requirements: .MP3 reader, 394 MB
Overview: From best-selling author Simon Winchester comes the immense and thrilling story of the world’s most mysterious and breathtaking natural wonder: the Atlantic Ocean.Atlantic is a biography of a tremendous space that has been central to the ambitions of explorers, scientists, and warriors, and continues to affect profoundly our character, attitudes, and dreams. Spanning the ocean’s story, from its geological origins to the age of exploration, from World War II battles to today’s struggles with pollution and over-fishing, Winchester’s narrative is epic, intimate, and awe inspiring.Until a thousand years ago, few humans ventured into the Atlantic or imagined traversing its vast infinity. But once the first daring mariners successfully navigated to its far shores – whether they were Vikings, the Irish, the Basques, John Cabot, or Christopher Columbus in the north, or the Portuguese and the Spanish in the south – the Atlantic swiftly evolved in the world’s growing consciousness of itself as an enclosed body of water. Soon it became the fulcrum of Western civilization. More than a mere history, Atlantic is an unforgettable journey of unprecedented scope by one of the most gifted writers in the English language.
Genre: Audiobooks > Non-Fiction 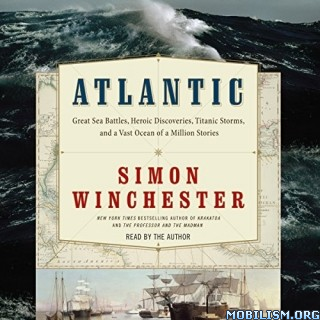