A Val Ryker Thriller Set – Three Complete Novels by Ann Voss Peterson
Requirements: .ePUB .AZW3 Reader | 1.5 MB
Overview: Ann Voss Peterson is the author of over thirty novels and has millions of books in print all over the globe. Winner of the prestigious Daphne du Maurier Award and a Rita finalist, Ann is known for her adrenaline-fueled thrillers and romantic suspense novels, including the Codename: Chandler spy thrillers she writes with J.A. Konrath and her own thriller series featuring small town Wisconsin police chief Val Ryker.
Genre: Mystery Thriller 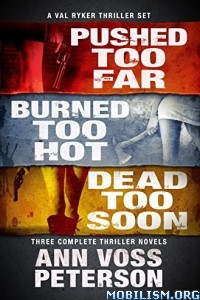 PUSHED TOO FAR
Everyone has a breaking point…
Two years ago a woman was brutally murdered, her body burned until only ash and shattered bone remained. Police Sergeant Valerie Ryker solved that case, putting psychopath Dixon Hess in prison for life, and becoming the first female police chief of her tiny Wisconsin town.
Then the original murder victim turns up in a frozen lake, all in one piece and only recently dead, and Val must enter a race against time. In only forty-eight hours, Hess will be set free, and he wants payback. And Val, her town, and everyone she loves are at the top of his list.

BURNED TOO HOT
Don’t play with fire…
Someone is setting fire to the town of Lake Loyal, Wisconsin, one building at a time. And Police Chief Valerie Ryker, and her former love, Assistant Fire Chief David Lund, have a hunch who’s behind it. Serial Killer Dixon Hess almost destroyed Val’s life, along with everyone close to her. He’s vowed revenge. But how can his influence of evil still be spreading when he’s safely locked up in the county jail? The link is a kidnapped toddler. Hess’s son. And some people will stop at nothing to see father and child reunited…even if that means burning everything to the ground.

DEAD TOO SOON
Revenge is hers…
When a school bus crashes on a snowy morning, Chief Val Ryker and her sometime boyfriend Fire Chief David Lund race to respond to the collision. As they rescue the children, it becomes clear this was no accident… but the launch of a monster’s newest diabolical scheme. With everything Val holds dear at risk and precious time running out, Val and Lund must turn to a cop named Jack Daniels and an assassin named Chandler for help. But all the help in the world won’t stop a rampaging Hess, and Val is about to learn what it feels like to sacrifice everything she loves… and everything she is.