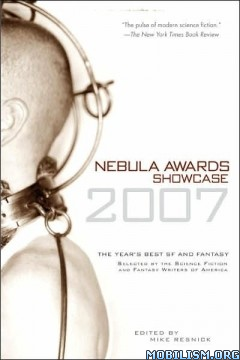 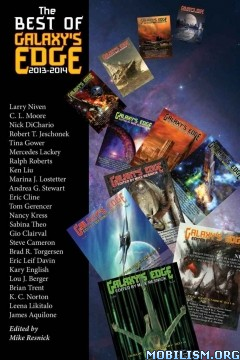 The Best of Galaxy’s Edge 2013-2014
Whether it’s God walking into the Draco Tavern, stony spirits talking to relatives, a robot plotting the ultimate murder, or the ability to see distinct patterns in the vibrations caused by uttering words and phrases … these stories will entertain you, make you laugh, make you think and, most importantly, make you question your own long-held views on life, the universe and everything else. The stories in this volume have been personally selected by Mike Resnick as his favorites among those that were published in Galaxy’s Edge magazine in 2013 and 2014.

Contents:
I, Arachnobot by Brian Trent
Pocket Full of Mumbles by Tina Gower
Creator of the Cosmos Job Interview Today by Nick DiChario
Will *You* Volunteer to Kill Wendy? by Eric Cline
Neep by K. C. Norton
Effect and Cause by Ken Liu
Ghost in the Machine by Ralph Roberts
The Prayer Ladder by Marina J. Lostetter
Holland: 1944 by Steve Cameron
The Spinach Can’s Son by Robert T. Jeschonek
Intersection by Gio Clairval
No Place for a Hero by James Aquilone
Happily Ever After by C. L. Moore
Upright, Unlocked by Tom Gerencer
Love in Bloom by Sabina Theo
Icarus at Noon by Eric Leif Davin
Matial by Lou J. Berger
Do You Remember Michael Jones? by Nancy Kress
Zombies at Work by Leena Likitalo
Exemplar (ASecret World Chronicles Prequel Story) by Mercedes Lackey
The Nechronomator by Brad R. Torgersen
Today I Am Nobody by Tina Gower
God Walks Into a Bar by Larry Niven
Totaled by Kary English
The Unchanging Nature of Stones by Andrea G. Stewart